The Incredible Bond with Our Very Special Service Dog

The incredible bond that we have with Christopher, our very special service dog all started when my husband Howard returned from his service in the Army.  Howard joined the Army just out of high school and he could not be any happier serving our country.  He was a member of the 101st Airborne Division and his last assignment was as a Stinger Gunner.  He is a Persian Gulf War Veteran, an Operation Iraqi Freedom Veteran, and an Operation Enduring Freedom Veteran.  Howard’s last tour was in 2005-2006.  He spent 18 months deployed and away from his family for both training and a 12-month deployment to Ramadi, Iraq.  This particular area of Iraq was a hot zone; they were attacked daily and engaged the enemy on a daily basis.  His unit suffered several losses all of which affected Howard in a different way. 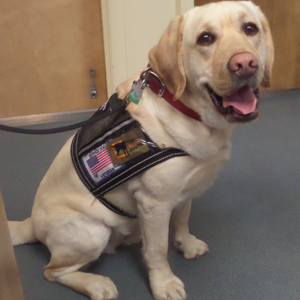 Howard returned home in June, 2006.  He was a decorated war veteran earning a bronze star.  I noticed that he was different; however, I attributed it to adjusting to normal life after being deployed for several months.  As time went on, I took notice to the issues gradually getting worse and after a series of severe flashbacks, Howard entered the Veteran’s Hospital (VA) and was officially diagnosed with Post Traumatic Stress Disorder (PTSD).  He started therapy and was put on a series of medicines to help control the issues related to PTSD.

After several years of treatment and a series of tests, the VA found Howard to be permanently disabled due to his condition.  So our new life began as Howard was officially unable to work and our family started coping with what I like to call the “new normal”.  He has good days and he has very bad days.  Nights are particularly bad because he suffers nightmares that can lead to severe flashbacks.  What is most troublesome is that the flashbacks can come from hearing a helicopter or a back fire of a car.  They can come from fireworks or a slam of a door.  They are unpredictable. 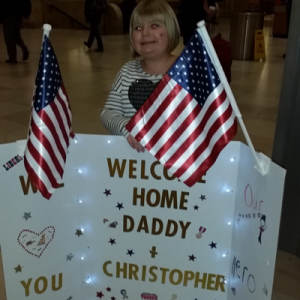 The VA suggested that we look into getting a service dog to help.  And so the search began.  We finally settled on an organization called “Puppies Behind Bars”.  They are based out of New York and they utilize people who are incarcerated to help train the puppies.  We like this program because not only did it help veterans, but it also helped the incarcerated give back to society.  Howard went through an extensive background check that required notes from doctors supporting his candidacy and recommendations from acquaintances.  We learned in late 2015 that he was selected to receive a puppy.  Just before Christmas, he attended a 2-week training where he was paired with Christopher.  He worked with Christopher and the handler in prison and learned all of the commands.  Upon graduation on December 21st, Howard returned home with Christopher at his side!  What a Christmas gift! 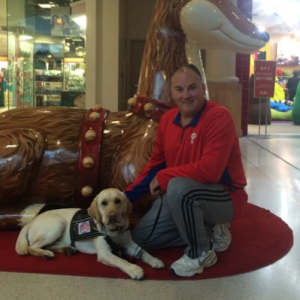 Christopher has helped Howard become more independent, he has helped keep him calm in large crowds, and if he senses his hypervigilance, he will lick or lay at his feet to help him feel more secure.  He goes everywhere with Howard and the bond between the two is unbreakable.  I have noticed a light starting to gleam in Howard’s eye.  He still suffers nightly nightmares and I know this will be part of our lives; however, Christopher makes it more bearable.

Our family would be lost without Christopher.  Howard didn’t ask for PTSD and to be quite frank we despise PTSD.  But, this is our new normal and with Christopher at his side our family is whole.

Thank you for allowing us to share our story.  It is truly an honor to talk of Christopher and all service dogs.  The bond is unbreakable and they unconditionally serve their handlers.  They stick by their handlers during the good and bad and their love is unending.