From Rescue Dog to Champion in Dock Diving – “Bo” McClaran 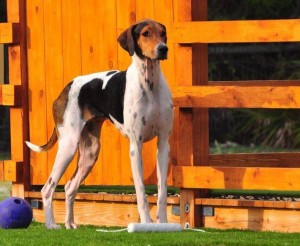 Recently, Crystal McClaran generously shared her story about her dog, who went from rescue dog to champion dock jumper.  This is the story of Bo McClaran.  We thought it was so great we wanted to share it with you………Bo came into my life 4 years ago when I walked into the right place at the right time.  The last thing I needed at this time was to adopt another dog.  I walked into the local feed store in South Carolina and the Beaufort County Animal Control had some puppies for adoption.  I know better – having my own rescued dog for some time – DON’T EVER look at the puppies.  I walked by with no intention of stopping.  However, my attention was drawn to my very first glimpse of Bo. Oh my, was he cute!  I couldn’t stop myself….next thing I knew I was in the puppy pen with baby Bo on my lap.  I quickly got out of there and left.  All day, I just couldn’t stop thinking about this little/big hound puppy.  So I went to animal control right before they closed and adopted my Bo.Bo and I had a special relationship right from the beginning.  He was such a cute, goofy puppy that never stopped growing.  At this time I had never heard of dock diving but I did spend a lot of time trying to get Bo into the water.  He wanted nothing to do with swimming until about 5 months old.  His first leap into the water was a big leap.  Bo never made an easy entrance – he would jump from the bank to the center of the pond.

I had no idea the journey Bo would take me on.  As we began the sport of Dock Diving in Florida at Aqua Dog Sports, Bo and I found a new love besides each other.  He quickly became a Dock Diving Star.  Bo and I have set 9 World Records in a 2 year span. The hard work, training and experience as brought us so close.  I know what Bo is thinking before he does and I think he does the same for me.  Don’t tell any of my other dogs but he is my favorite. 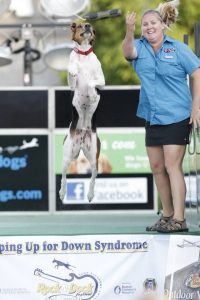 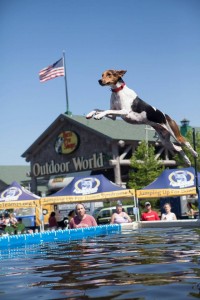 Bo and I spend 5-6 days a week conditioning and training to keep pushing the records and defending new ones. I do take the sport very seriously but it’s really about the fun and passion we share for the game.  Bo treadmills or I bike ride him 5 miles at least 3 days a week. The other 2 days, we usually do sprints and dock dive at least 1x week. The key to our training and success is conditioning and always having fun on the dock. 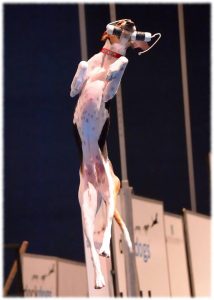 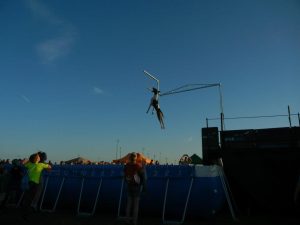 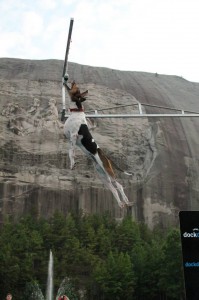 To prepare for an event I usually give Bo 3 days off to rest before he gets on the dock. We take about 2 weeks off from Extreme Vertical to make sure he’s itching to get that bumper (Bird).  For Big Air (BA), Bo will usually do his biggest jumps after he does Extreme Vertical.  Speed Retrieve (SR) is something Bo has recently improved in so much. We have trained hard for SR. He previously would leave early on the dock and this would hurt his time. Since he is such a big dog he needs all the distance he can get so he doesn’t have to swim far to get the bumper.  Bo went from being the 15-20th ranked SR dog to the 6th.  Bo is also ranked the #4 BA dog which is amazing.  I changed my throw and it has really upped our game.  Excelling at all 3 DockDog disciplines has made Bo the #1 Iron Dog in the World and the 2013 DockDogs Iron Dog World Champion. Bo is also the #2 Ranked Extreme Vertical Dog and we hope to get our records back in this division here very shortly. His record of 8’8″ was recently beat by Tony Lambert and Griz by one inch. 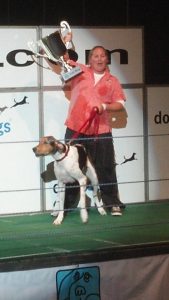 Being a hound, Bo is a sucker for food and treats.  He really doesn’t have a favorite.  I would say his favorite things to do are chase a Tennis Ball, lean on people, sleep next to me in bed and once a week I try to just have a me and Bo day.  We go to lunch, watch a movie or spend time at my parent’s house.

Through training, experience and building a strong bond…. we are Team Bo Nose!