Thinking About Adopting a Greyhound?

So you are thinking about adopting a Greyhound? I say GO FOR IT! I may be a little biased though as I have my own retired racer, and have had a love for the breed most of my life.  These retired athletes make great pets, and there are thousands in need of a home right now!

Here is a little history about the breed:

For the first year of their lives greyhound puppies live together with their litter mates. They start training as early as a few weeks old, encouraged to run and chase each other. At 4 months of age, they start keeping them in individual crates where they spend most of their time between training and exercise. At 18 months they are sent to the track where they start their racing career. If they do not consistently do well, or show little or no prey drive they are retired, returned to breeding farms to be put back into the breeding program, put up for adoption or euthanized. For the most part today’s tracks put the retired runners into their own adoption kennels where they are given a specified period of time to be adopted, if they are not adopted by that time, unfortunately they are euthanized to make room for more retired dogs. This is where rescues come in. The rescues take groups of greyhounds from the track adoption kennels and bring them to their own adoption kennels and find homes for these unwanted dogs. 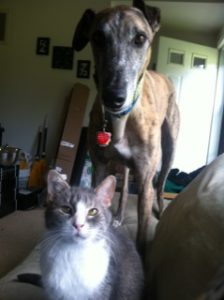 If you’re interested in taking one of these little angels home, there are things to consider. Their lives have been EXTREMELY regimented their whole life so far. They have a routine, and like to stick to it. They usually spend 15-20 hours a day in an individual crate, the only time they have outside of the crate is to go out for exercise with the other greyhounds, and occasionally racing. So when they are brought into a home for the first time they are in a completely alien world.  Many are scared without other dogs around because they have been around other dogs since they were born. Some greys are even scared of other breeds of dogs, since they’ve only ever been around other greys their whole lives. Things as simple as a television, a ringing phone, a vacuum cleaner can scare them! Most have never seen stairs before, and will need to learn how to climb up and down them. One of the scarier issues with greys right off the track is big windows, or glass doors. They see a rabbit or squirrel outside and will instinctively RUN for it, crashing through the glass. This does happen, so it’s something to be aware of. Some people put stickies on the windows so that they can see there is something there and it’s not an open space to the outside. That being said, many greys like to be crated, since they’re used to it, it’s always safe to keep them in a crate for the first few months you have them when you’re not home. Eventually many can be trusted without the crate.

Another good first-time greyhound owner tip is that you should NEVER let one off leash in an area that isn’t completely fenced in. They have been bred for thousands of years to chase small animals, and they will. The prey drive that is instinctive to them is further reinforced and encouraged during their training at the track. Because they are sighthounds and don’t use their noses while running down prey, once the chase is over, they don’t know how to get back to where you are. And since they can reach speeds of up to 45 mph in 3 strides they can get pretty far very quickly.

Once you understand the basic mindset of a greyhound they are VERY easy pets. I like to joke that mine is like my 3rd cat….a 70 pound cat!! He sleeps on the couch ALL DAY! They are fast dogs, but they are HUGE couch potatoes! That being said, he still LOVES going for hikes, running around the dog park, and rides in the car, but he’ll never turn down a good lazy day on the couch either! 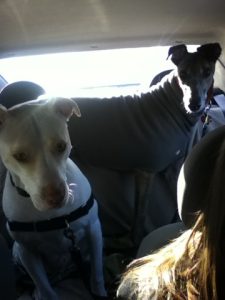 They’re very calm, quiet and laid back dogs. While they RARELY bark, they do like to let out a good howl if you can get them started! If you’re looking for a dog that will constantly be running around the house looking for you to play fetch 24/7, this isn’t the breed for you. They do LOVE to play, but they appreciate a good nap as well.  They are widely known as being extremely affectionate and sensitive.  While they made their careers out of running, they aren’t a high energy breed, they’re sprinters, not endurance runners and only need a walk a day to satisfy them!

Their lean body has often been criticized out in public. At least I know when I go out with Manny I have heard it all! Whispering about how I must starve him, been asked to my face why I don’t feed him etc. These dogs have a very small body fat percentage, less than half the amount that other dogs have. So it is normal to see their ribs since there isn’t a layer of body fat over them, unlike other dog breeds. If you can’t see a Greyhound’s ribs, they are considered to be overweight. They also have a very thin coat, and with both of these characteristics combined they don’t tolerate extreme cold well or extreme heat. If you are cold without a jacket, chances are your greyhound will be cold as well, so stock up on some sweet sweaters and cute jackets! 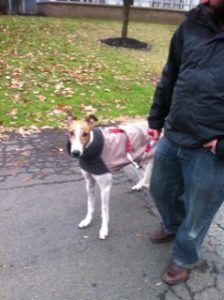 If you’re looking for a well-mannered, laid back, affectionate companion who will never leave your side, look into a Greyhound! They don’t like to be alone, and will follow you wherever you go. Manny could be in a deep sleep and I get up off the couch and walk into a different room, I hear him running up right behind me leaning on my legs as if to say “where are you going?! Don’t leave!”

There isn’t enough that can be said about people who rescue pets. You are amazing, compassionate people and we thank you for giving a second chance and a loving home to animals that are unwanted for whatever reason. There is something about a rescue – they seem to know that you saved them – and make absolutely amazing pets! For more information on Greyhounds and adopting a retired racer, look into your local Greyhound Rescue, you won’t be disappointed!!