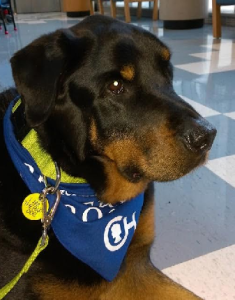 Ever since my dog, Bosco, was a puppy I wanted to socialize him as much as I could in a lot of different environments so I could take him just about anywhere.  We would go to different local events where I knew there would be people, kids and other dogs.  About five years ago I took him to a walk benefitting cystic fibrosis in honor of a good friend of mine whose sister had passed away from the disease.   After the walk was over, we were gathered around an area where there were a lot of children playing.  All of a sudden, the kids came running up to Bosco, petting him and asking questions, giving him hugs and tugging on his fluffy fur.  Bosco didn’t seem to be bothered by it one bit.  It actually looked like he liked all the attention!

It didn’t even occur to me that he could be a therapy dog until after I told the story about the kids to my sister, who happens to work at the Children’s Hospital of Philadelphia.   She suggested the idea of Bosco becoming a therapy dog.  I had never really thought about it before and decided to do some research into how to get Bosco registered as a therapy dog.  The process was not as difficult as I thought it was going to be.

I contacted Therapy Dogs International, which is a volunteer organization dedicated to testing, regulating and registration therapy dogs and their volunteer handlers.  Bosco had to pass a test reflecting real-life situations designed to simulate a therapy dog visit at a nursing home, hospital or facility where a therapy dog would be needed. 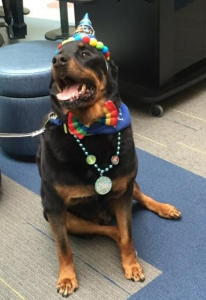 We went on a designated date and time to take the test which consisted of Bosco following some commands:  sit, down, stay.  After that, he was tested for his temperament and behavior.  These tests involved his reactions to different situations including: how he reacted when someone approached him and walked by him, someone in a wheelchair coming up to him, seeing another dog, and loud sounds – which all didn’t seem to bother him one bit.  He passed the test on the first try!  He also had to do a similar test at Penn Veterinary Hospital.  They conduct yearly checkups as part of CHOP’s protocol to be a therapy dog in their pet therapy program. 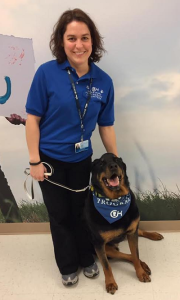 Once I got my human clearances, we were off to start our visits.  In a nutshell, it consists of Bosco and I visiting designated floors at CHOP and going to each hospital room and seeing if anyone would like a visit.  That could be the child, the parents, visitors or even the nurses or doctors!  We go into the room and say hello.  I try to get Bosco as close as I can so the child can see Bosco up close and pet him.  Bosco has such a laid-back personality.  He seems to really love all the attention and petting that he gets, and sometimes he even gives his paw to those who ask for it!

It’s truly a wonderful experience being a volunteer.  Sharing my dog with those who don’t get the chance to leave the hospital for any length of time is really rewarding – not only for me, but for Bosco, too!  Bosco and I have been doing therapy work for three years now.   He knows it’s time to go to work when I put his blue bandana on.  He has gotten the routine down so well that after we sign in at the volunteer center at CHOP, he’s already heading to the door to get on the elevator and start doing what he does best – bringing smiles and joy to all those around him!