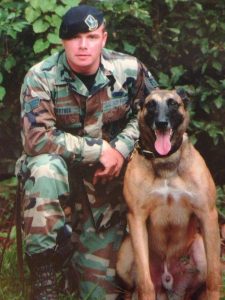 Officer Jeff Portock, one of the officers in the Pottstown Police Department’s K-9 Unit, began his career in the United States Air Force, where his training and work with explosive detecting dogs began. I was delighted when he agreed to share his wonderful story about Cliff with me – a military dog and his partner.

I’m happy to share my story of Cliff and I. Cliff is a pure Belgian Malinois and is now 12 years old.  I first met Cliff when I returned from an 11 week long K9 school, held at Lackland AFB.  I was in the Air Force Security Forces from 1998 -2004 and was selected to the K9 program for the last three years of my service.  Once I finished K9 training and returned to my home AFB which was Moody AFB in Georgia, I met Cliff who had already been stationed there and not yet assigned a handler.  Cliff had just finished his initial training as well so we were both pretty green as they say.

We were attached to a K9 unit in the 823rd Security Forces Squadron which was a voluntary unit that deployed at least six months out of the year specializing in Air Base Defense.  Cliff was a Patrol/Explosives dog (same as Taz, my dog who is part of my current K-9 Unit) and we spent much of our time deployed searching for explosives.  During our service time together we deployed to Kuwait, Iraq, Jordan, and United Arab Emirates in support of Operation Iraqi Freedom and Operation Enduring Freedom.  Much of our time was spent at base entry points searching vehicles for explosives as they entered.  We also would conduct foot patrols outside the base checking different areas and keeping the area clear of any suspicious persons or devices.  Once in a while we would be attached to different units to conduct foot patrols outside the base to assist in locating devices (improvised explosive devices) along roadways where other US troops would be traveling. 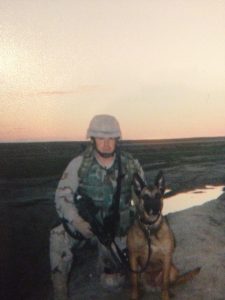 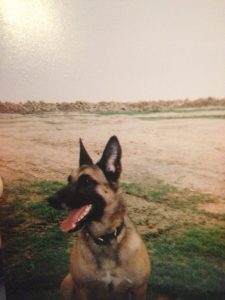 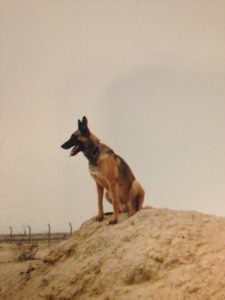 Military and Police K9 units have very similar training.  For me, over the years the training has evolved so that we can have better, more prepared K9s.  I had a few years between when I served in the AF and when I became a Police K9 handler.  With that said training is a bit different now but the main ideas stay the same.  I’ve learned that training dogs to work is mostly about having a good, high drive dog with great instincts, and a good nose.  I have also learned that 80% of what a dog does while he works is instinctual and the remaining 20% is actually learned/taught by the handler.  Basically, if the training is done right with a good dog, all you need to do is shape the behaviors of the dog that he already exhibits.

When Cliff and I served together, I was his only handler during the entire time. In 2004, when I separated from the Air Force, Cliff was still young enough to continue to serve and another handler picked him up.  He went on to continue to serve for two more years deploying several more times over seas.

Once I separated from the Air Force I kept in close touch with the Kennel Master at Moody AFB.  Cliff ended up having knee surgery a year and half after I separated.  On his last deployment to Iraq, Cliff began having more trouble with his knee and could no longer work at 5 years old.  Cliff had to stay in country because his handler and Unit still need to finish their time.  As a result Cliff spent the remaining six months as a “Therapy Dog”.  Because of his rare calm demeanor his handler took him to visit injured military personnel in an attempt to up lift their spirits.  I am told he did a great job.  I have found that even in his retirement Cliff always brightens the day of whoever he comes in contact with.

When I heard that he was coming home and retiring I put in a request to adopt him.  This is actually a process in which the dog to be adopted must pass several “liability tests”.  Due to the aggressive nature of the K9 job most dogs cannot be adopted out because of the likelihood of them possibly biting someone.  Most of the time they go back to Lackland AFB where they assist in training new K9 handlers, that way they can limit the work load for the dog in their old age.  Cliff did pass the tests as I knew he would and a friend of mine brought him home to me in 2006.  Cliff has taken to retirement very well.  In his old age he still chases the ball with a lot of drive but doesn’t always listen the way he used to (that’s expected I guess). Also, whenever possible Cliff will travel with me and my wife when we go out.  Sometimes I even think that people would rather get a visit from Cliff rather us. Cliff is a great dog and we have a strong bond.