Meet Gilbert, the official mascot of Gilbertsville Veterinary Hospital.  Gilbert joined the GVH team in Fall of 2014. He was a little “ruff” around the edges at first.  So we sent him to GVH Business Manager, Diane’s house for a week long doggy boot camp. Boot camp was a challenge that involved some obedience training but with a little persistence and lots of treats, he graduated with honors. 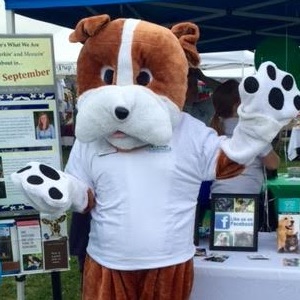 After graduation, GVH Practice Manager, Tiffany promoted Gilbert to official mascot of Gilbertsville Veterinary Hospital.  Gilbert knew this would be a super job for him – so he cut back on treats, exercised daily, and studied hard for his new position.  He has been doing awesome ever since.

You can meet Gilbert at one of our many community events; like the annual Pottstown Pet Fair – Bring Fido, Barktoberfest 2015, and our annual Halloween Costume Contest. He loves to give high fives.  He also enjoys having his picture taken with all of his friends. So if you see Gilbert don’t be shy, come on over and say “Hi!!”  You never know when he will make an appearance!!

Here’s a few of his Stats:

After getting this first year under his collar, our mascot really enjoys helping the team at Gilbertsville Veterinary Hospital celebrate the bond between you and your pets.

Stay tuned for a list of Gilbert’s future appearances…