Ginny Weasley and “Her Boy” 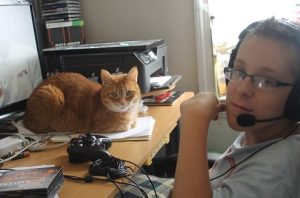 In March of 2008, I was in charge of doing weekend treatments for the rescued orange kitty at GVH with many medical issues. She was still young but, had endured so much including, reoccurring upper respitory infections, poor nutrition and unexpected breeding.  She was still looking for her forever home.  On Saturday night, my then 7 year old son, Dorian, and I stopped in around 7 to medicate, feed and have some fun play time with her.  Upon letting her out of the cage, she immediately began to rub around my son’s wheelchair running between the bars and wheels. I tried to distract her with kitty toys but, she would not leave my son. I then gave Dorian the kitty toys and immediately she began to play, running after the balls and fuzzy mice. The most amazing part was she would attempt to roll the toys back in his direction. After much playing and a yummy dinner she became tired and jumped up on Dorian’s lap asking for head and ear rubs. After seeing how accepting and un-frightened she was of my son and his wheelchair, the little orange kitty was destined to come home with us. I found a carrier and packed her up to come home to her forever home and forever best friend.

Five years later, the love for one another has not wavered. Ginny Weasley’s favorite place to be is with my son. The bond between her and my son is so remarkable.  She gets up with him every morning and watches from the window as his bus takes him off to school and every afternoon she runs to the window when she hears the bus pull in to the drive way. She can’t wait to greet her best friend!! Ginny and Dorian both have had major medical issues and they have both been there for each other. In June of 2012, Ginny became very ill needing much medical care that caused her to develop a heart condition. Dorian was there for her helping with treatments and making sure she had a quiet place to recover at home. Their relationship is as strong as that first day they met. Now both being older, they enjoy video games and computer time together. Ginny lies between the computer and keyboard/controller and will sleep while Dorian fends off Creepers in Mind Craft.