Everyone has heard all the warnings regarding holiday hazards and your pets – but like many things in life – do you really think it will happen? Until it happens to you! From toxic foods, to decorations and gifts, what seems to be a harmless holiday treasure can be harmful in many ways to your pet. Below is Lou’s story – and why I will never, ever use tinsel again.

Out of my four little feline children, Lou has always been my problem child. Being my first pet on my own right out of high school, I guess he likes to see himself as the “boss” of the crew. After beginning technician school, I had started a position as a technician assistant in the Lehigh Valley right before the holidays. Still not knowing much about the field, I was excited for the opportunity and ready to begin my career. Through school and working, I found the time to do my normal holiday decorating (because who doesn’t love the holidays?) and as the year before, Lou enjoyed his naps in the tree. He even let me capture the perfect picture with him playing with some tinsel! I had no idea the gift Lou had in store for me for the holidays.

A few weeks after starting my new position, I suddenly noticed that evening Lou was acting quite slow and lethargic. The following morning, I awoke to 7 piles of large vomit and Lou laying flat out on his side. As any pet owner would, I immediately became concerned and took him directly to work. After taking radiographs and an ultrasound, it was clear that Lou had some type of foreign body. 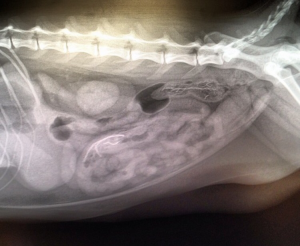 When asked if he could have gotten into anything, nothing really came to mind. The next step for Lou (and my wallet) was emergency exploratory surgery. After about an hour and a half in surgery, the doctor was able to come to a very thick, purple looking section of the intestines which was clearly causing the blockage. All I remember was the doctor holding up a very shiny, about 2 inch thick bunch of TINSEL! The tinsel that Lou so intelligently decided to eat had bunched together and caused a GI blockage, and if it was not for the swift action of performing the surgery, he may not be with me today. After the surgery, Lou spent about 2 days in the hospital and had a pretty rough recovery. After fluids, multiple medications, hand feedings, and lots of love (although he did not really like it), and draining Mom’s holiday cash,  Lou was finally able to come home.

Now 3 years later, every holiday season I remember to be extra cautious with what is brought into my home. Lou even enjoys eating flowers, which I no longer am able to enjoy keeping around! After all he has been through, Lou still lives a happy cat life of luxury. Just a friendly reminder to always be aware of possible hazardous ingestions – no matter the time of year!

Are You Sure You Have an Alapaha Blue Blooded Bulldog?