Animals have a long history of helping the military in times of war. Military animals have helped to keep military personnel and bases safe, provided transportation of supplies and personnel, kept communication open between personnel, and controled disease. Many people are unaware of the key roles that animals play in the Military:

Dogs have been part of the military for hundreds of years. Most recently they have been trained for communications – to carry messages in battle or pull telephone lines from one location to another. Military dogs are also used for the detection and tracking of fugitives or enemy troops. With their keen sense of smell and hearing, Scout Dogs are trained to silently locate booby traps and concealed enemies such as snipers. Dogs are also great at patrolling military camps or bases for intruders. They alert guards of a stranger’s presence by barking and growling. Because of the actions of dogs in the Vietnam War, it is estimated that over 10,000 human lives were saved. Military dogs today are actively working to keep our troops safe. 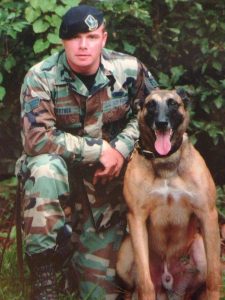 Sailors and cats have a special relationship that dates back thousands of years. Cats were often used during war to provide protection by ridding ships of vermin. Without the presence of cats, a crew might find their ship overrun with rats and mice that would eat provisions, chew through ropes and spread disease.

Horses have been part of the United States Military for hundreds of years. They were used as riding animals, to be controlled with limited use of reins and to respond primarily to the rider’s legs and weight.  Horses were heavily used in World War I in battle but were slowly phased out because of the introduction of tank warfare. During World War II horses had limited use. Horses are seldom seen in battle today, but are used for the transport of troops and for ceremonial and educational purposes.

Dolphins have been serving as part of the U.S. Navy for more than 40 years as part of the Navy’s Marine Mammal Program. They were used in the both the Vietnam War and Operation Iraqi Freedom.  Dolphins are very intelligent animals trained to detect, locate and mark mines. They are also able to alert the Navy of suspicious swimmers and divers.

Sea lions are another animal used in the U.S. Navy’s Marine Mammal Program as part of the Navy’s Shallow Water Intruder Detection System.  They are trained to patrol Navy bases and were even deployed to protect ships from terrorists in the Persian Gulf.  They are able to locate and tag mines just like dolphins but also can cuff underwater intruders. The sea lions are trained to carry a spring clamp in their mouths that can be attached to a swimmer or diver by simply pressing it against the person’s leg. In fact, the sea lions are so fast that the clamp is on before swimmers are even aware of it. Once a person is clamped, sailors aboard ships can pull the swimmer out of the water by the rope attached to the clamp.

Homing pigeons have been being used by both American and British forces since World War II. The U.S. Army had an entire Pigeon Breeding and Training Center at Fort Monmouth, N.J., where the pigeons were trained to carry small capsules containing messages, maps, photographs and cameras.  Pigeons played a key role in the D-Day invasion because troops operated under radio silence. The pigeons were able to send information about German positions on Normandy beaches and reported back on the success of the mission. Military historians claim that more than 90 percent of all pigeon-carried messages sent by the U.S. Army during the war were received.

Honeybees are the new animal heroes being used in the military.  Because of their keen sense of smell, with antennae able to sense pollen in the wind and track it down to specific flowers, they are able to recognize the scents of bomb ingredients. When the bees pick up a suspicious odor with their antennae, they flick their proboscises — a tubular feeding organ that extends from their mouths.  Honeybee bomb-detection units are an effective aid to the military because they can be housed in a simple box stationed outside airport security or a train platform.  Inside the box, bees are exposed to puffs of air where they could constantly check for the faint scent of a bomb.  A video camera linked to pattern-recognition software alerts authorities when the bees started waving their proboscises in unison.