As National Greyhound Adoption month is drawing near it makes me reflect on my boy, “Manny” and the road I traveled to become a proud Greyhound owner. I guess it all started when I was a kid. A Reverend in town used to ride his bike all over town, and his beautiful black and white Greyhound would be right at his side. I always admired this dog, and started asking my mom questions about it. She explained that he was a Greyhound; they were used for racing and were quite fast. So this peaked my interest and I started doing some research of my own. I thought they were beautiful, regal looking dogs, and it was obvious that they had a playful side as well from what I saw and read.  Though I was still only about 12 years old at the time, I knew that someday I’d love to own one of those beautiful, graceful creatures.

As time went on, through High School and College, I still loved to see people with Greyhounds around town. I also developed a love for some other breeds, Great Danes and Dobermans. After college I started working as a Veterinary Technician, loving every aspect of it and interacting with SO MANY different breeds of dogs. But I have to say, whenever a Greyhound would come in, I’d fall in LOVE instantly.  They were so quiet, reserved and calm.

I knew Greys have a high prey drive since that’s what drives them to race,

so I was a little concerned when I started looking into rescues.

Fast forward about 7 years, when I was finally living on my own.  I started thinking more seriously about getting a Greyhound of my own.  I already had a Pit Bull mix and two cats, one of which was pretty old. I knew Greys have a high prey drive since that’s what drives them to race, so I was a little concerned when I started looking into rescues. After much research I discovered that most if not all Greyhound Rescues try to cat test and small dog test their rescued racers to ensure that they go to a home that will fit their needs as well as the adopter’s needs. This is something that was very important to me. 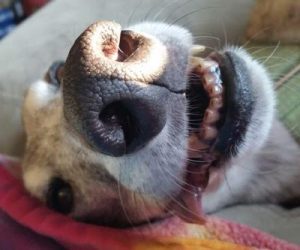 After a few months of research, I went to the National Greyhound Adoption Program (NGAP) in Philadelphia to visit and meet some dogs. The day I went the adoption office was closed since it was a Sunday, but the kennel workers let me in to see some of the dogs, and I was even allowed to take some out for walks, and interact with them in a fenced in area. It was really fun, and I got a good idea of all the different personalities of these dogs. Some were EXTEMELY shy, some really outgoing. Some were calm, and some were a bit more excitable. After the day in Philly, I couldn’t decide on which one I liked best (they were all so cute!!). But ultimately it doesn’t matter because with Greyhound rescue, you usually don’t get to hand pick one if you have special needs at home i.e., other pets or small animals. I decided to do some more looking around, and discussing before I took the plunge.

After 2 more months of researching and discussing, I went to a “meet and greet” at a local pet store that I saw the local Greyhound Rescue was hosting. Linda Ann’s Greyhound Rescue is based in Allentown, only about 10-15 minutes from where I live. I stopped by to meet with the volunteer and ask some more questions. She was there with her adopted pup, Hunter who was very tired after a long day of meeting people. We talked a bit and I took a brochure. When I got home I decided to go online and fill out an application. Applying was easy, I needed some references that they would check; a Veterinarian, friend, and neighbor. A few days went by, and I got a phone call from the adoption coordinator. We talked for a little while about what my home situation is like, if it was a loud/crazy house or more quiet. She asked about my other pets and what I was looking for in a potential Greyhound. I explained that size, sex and color weren’t an issue (for some people it is).  I just wanted a more laid back hound that is good with other dogs, and cats. I stressed how important it was to me that the potential dog did not chase cats since mine are both older and one is a senior. She assured me that all their rescues are cat tested and are living with fosters. This was different since NGAP was a kennel and Linda Ann’s Greyhound Rescue was a foster program where the rescues live with foster families.  As a result, they get a good idea about the personality and interaction with other people, kids, pets etc. She assured me she would look for one that would fit what I was looking for, and would call me with updates. Once I heard from her, I would arrange a meeting with the foster and our dog to make sure they get along.

Only a few days later I got the phone call. “I think I’ve found the perfect dog for you. His name is Manny, he’s 5 years old, and he lives with 3 other dogs, a cat, and a bird.”  She said I could find his picture on the website, so I pulled it up and thought that he was super cute! (Then again, they all are!)  I agreed to meet with his foster mom.

I met Manny at a Petco in Allentown, our other dog seemed to like him, and Manny didn’t seem to dislike him (he’s a pretty stoic guy).  So I decided to call up Linda Ann’s and let her know I would like to pursue adopting Mr. Manny! Things went pretty quickly after that.  She asked “so when would you like us to bring him over?” I decided on a day when I was home for most of the day, so I could be there with him to get him settled in.  She asked that I have a bowl, a toy and crate ready before I had him delivered.  (I already had all these things).

Manny officially became my adopted Greyhound on March 6, 2014. They brought him right to the house, and got him all settled in. They also brought the paperwork as well, and went over it all in detail. I also received:

Since I have had Manny he’s been opening up more and more. He started out pretty shy, but after a month or two his real colors began to shine through. He’s a huge couch potato (as they all are) but he definitely has his goofy side as well! He LOVES going on walks, riding in the car and generally being anywhere that you are (another trait of the breed). He has never chased the cats, and has fit right in! He became a fast member of our family, and I couldn’t imagine life without him. Of course he’s got his naughty side as well, he enjoys rooting through the trash EVERY TIME I go out, and so I have been keeping the trash cans locked up. Sometimes he likes to go into your laundry basket and hoard all the clothing on his bed. (They say Greys like to do that as well.) But he’s overall a good boy and I am SO glad he came into my life!See Linda Ann’s Greyhound Rescue for more information. I promise you won’t be disappointed!!