The K-9 Units of the Pottstown Police Department 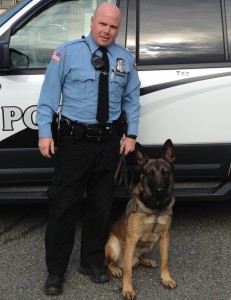 Taz, a german shepherd mix, and his handler Officer Jeff Portock (seen pictured left) have been training together for 2 years.  Taz came to the US from the Czech Republic and is an explosive and patrol dog.  He is capable of distinguishing more than 20 odors.  When he smells an odor that is related to explosives he indicates to his handler by immediately going into a sit position.  The training involved is extensive and rigorous for this important and dangerous role.

Jak, a german shepherd mix, (pictured below left) came in recently for a wellness visit.  You can see immediately the unique bond between Officer Yambrick and his dog.  Jak is a drug detection dog and a patrol dog with several successes in apprehension and drug detection. Officer Yambrick says, “Jak tends to be a vocal dog – barking while in the back of the vehicle.  This alone has helped diffuse several tense situations because people hear Jak and become intimidated.” 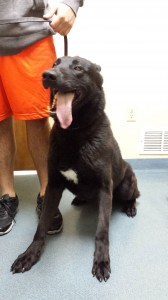 Kato, a german shepherd, and his handler Corporal Steve Hatfield, have been working together for a year and a half.  Kato has been a remarkable asset and Corporal Hatfield said, “By far this is the best job he has had.”  The dogs, together with their handlers, train rigorously through a program at Castle’s K-9 and must pass a certification test before they are permitted to begin “their job”.  The training is ongoing both on a formal basis and an informal one (the handlers train a lot on their own time).  Much of the training focuses on obedience as well as their area of concentration, either drug detection or bomb detection.  Corporal Hatfield said, “Obedience is the key.  Everything else [all their jobs] comes from their ability to obey a command at the right time.”  Kato has been successful in his job already…two apprehensions without physical contact (bites).  Sometimes just the presence of a K-9 unit can change a volatile situation to a peaceful resolution.

GVH enjoys helping to keep the K-9 units of the Pottstown Police Department healthy and ready to keep the community safe.