To Leash or Not To Leash

I was recently walking my seven year old dog, Sadie Jane, in our neighborhood and out of the corner of my eye I saw a dog off leash running toward us. I quickly gripped up on Sadie’s leash when I realized that the owner was chasing her dog and seemed to be panicked. I knew that the best thing for all of us to do was to remain calm. Visions of the two dogs attacking each other and possibly us made this a little difficult. Sadie has never attacked another dog or person but if placed in a situation where she felt threatened or where she felt I was in danger I know it could change in an instance. The dogs began to sniff each other as the other dog’s owner struggled to hook the leash on the collar. The more the woman struggled the more the dogs began to seem agitated and I knew it was just a matter of seconds before a possible altercation might occur. Finally, the other dog was leashed and I quickly began walking away. I kindly informed the owner that it would be in the best interest of everyone to always keep her dog leashed or harnessed at all times when in public. 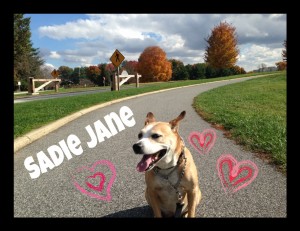 After praising Sadie and myself for remaining calm, I realized how devastating that situation could have turned out for everyone involved. I wondered if the other dog owner had ever thought about the endless negative possibilities she was leaving herself and dog vulnerable to. I often hear people say that their dog would never harm another dog or person. While that statement may be true for your dog thus far, remember it is natural for dogs and people to react and defend themselves if provoked or attacked. So for me keeping my Sadie on a leash is about keeping her safe. This experience really made me reflect on this topic and I have created a list of some things to think about.

As pet parents our goal is to always keep our “kids” safe and happy. Sometimes the best knowledge we get is through the experiences of others. I wanted to share our story in hopes of preventing a negative event in your family.