What is a Pyometra? 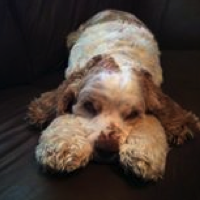 Mrs. Jones was waiting in the exam room with Princess on a busy Monday morning.  I greeted them with a “Good morning, Ladies!”

Ms. Jones had a nervous smile in reply.  “Dr. Hanlon, I am worried about Princess.  She hasn’t had a good appetite for the past week and now she is drinking water like crazy!  She is lying around a lot and she has…well…a discharge from her private area!”

I mentally reviewed the facts about Princess.  She was an 8 year old female (unspayed) Cocker Spaniel.  Although Ms. Jones was excellent at preventative care for Princess (exams, vaccines, heartworm protection, flea and tick preventative), she had never gotten around to having Princess spayed.  At first she had wanted her kids to see the “experience of birth” with the puppies, but now the kids were older and she was concerned about the anesthesia for Princess.

After I had examined Princess, I asked Ms. Jones when Princess had last had a heat cycle.  She said she was not exactly sure, but it seemed like she had finished up a heat cycle about a month ago.  I told Ms. Jones that I was concerned about a pyometra.

“What is a pyometra?” replied Ms. Jones.

I explained that a pyometra is an infected uterus in a female dog or cat. (It is much more common in the dog than the cat).  The toxins and bacteria can leak across the uterine walls and into the bloodstream, causing life-threatening toxic effects.

“How would Princess get something like this, especially at her age?” she asked.

I explained that in the dog, with each heat cycle the uterine lining engorges in preparation for pregnancy.  This engorged tissue is ripe for infection, and this effect accumulates with each heat cycle.  This means that older female dogs are much more likely to develop a pyometra because they have experienced many heat cycles (although it is not impossible for a female to have a pyometra after her first heat cycle).

I went on to explain that Princess was showing the classic signs of a pyometra:

I also explained that Princess looks like she has an “open” pyometra, meaning there is a discharge, as compared to a “closed” pyometra, when there is no discharge.

“Ms. Jones, we are going to have to do some X-rays, maybe an abdominal ultrasound and perform some in house bloodwork to confirm our suspicion of a pyometra.”

“But Dr. Hanlon, what if Princess has this what-ever-you-call-it?  What do we do about it?”

“Well, Ms. Jones, we would need to remove the site of infection in Princess; in other words, we would have to spay her.  This is more complicated than a routine spay, because Princess is compromised.  But with the anesthetics we have today and excellent monitoring and care she will receive by the surgical team, I am confident that we can get Princess through this.”

Ms. Jones asked if there was any other treatment plan besides surgery.  I told her that we could treat with some hormones called prostaglandins, but the rate of reoccurrence of a pyometra on the next heat cycle is high.

“Well, I certainly don’t have any breeding plans for Princess; I just want her to get better.  When can we do the testing and the surgery?” asked Ms. Jones.

“I will have the technician admit Princess, and we will start the diagnostics right away.  I should have the results within a couple hours.  I will call you and if everything is as we expect, we would do the surgery sometime today.  I would expect Princess to stay in the hospital a couple days.” I responded.  Ms. Jones was happy that we were going to help Princess.

I went to my next appointment with Mr. French.  He was excited for me to see his new Golden Retriever puppy.  We discussed many of the health concerns about caring for a new member of the family.  He then stated that he was thinking about breeding his new female puppy “just once, you know, so we can have the experience”.  I then spent the next 10 minutes explaining the benefits of spaying a female dog at a young age, such as decreasing the risk of breast cancer and prevention of pyometras.  “I have heard of pyometras, because my friend’s dog had one.  Do you see many dogs that have?”  I smiled and said “Yes, Yes we do!”