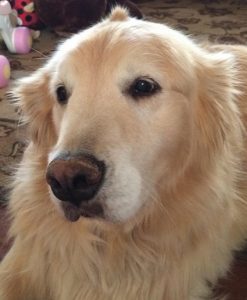 A very special Golden Retriever puppy entered the veterinary office where Dr. Sarah Kearse worked almost 7 years ago.  At that time he was diagnosed with a very serious heart murmur.  The puppy, the runt of the litter, was brought into the hospital by a breeder and the diagnosis was that he was not a good candidate for sale or for breeding.

Dr. Kearse and her husband decided to adopt the puppy and named him Bean.  As soon as Sarah brought Bean home she could tell that he was a special puppy.  Like most puppies he loved to chew on things and Bean’s favorite chew toy was cords.  That April Sarah and her husband puppy proofed their house by moving all of the cords up high and unplugging items before they went to bed. 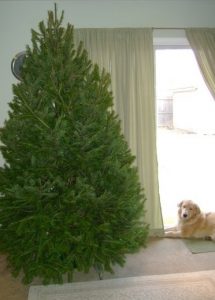 As Christmas approached Dr. Kearse knew that she would have to be extra careful with the decorations. She did a good job of unplugging the Christmas tree and placing the cords in a high to reach place so Bean could not chew on them every night.

Saturday morning only a few days before Christmas, Dr. Kearse walked down the stairs and stepped on a broken Christmas tree ornament.  She looked up to see that Bean had gotten into the tree and chewed on the Christmas tree lights.  After cleaning up the mess, evaluating the situation she felt that Bean was in no danger so she went off to work.

The next night the tree lights were placed even higher and ornaments were removed from the bottom of the tree but unfortunately this did not stop Bean.  Bean was determined to eat the Christmas tree lights and that was just what he did on Saturday night.

Dr. Kearse took Bean to the hospital to further examine him, perform radiographs, bloodwork and put him on IV fluids. After consulting with her colleagues, they determined that surgery would be the best option, but because of Bean’s heart condition it would be too risky. 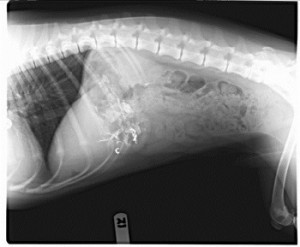 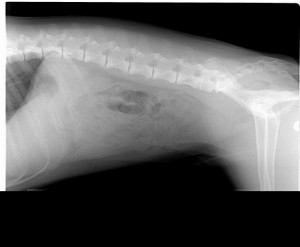 The radiographs revealed that there were tree lights in Beans intestines and stomach so they placed him on a special diet (w/d) to bind up the contents.  Bean had to be monitored very closely, radiographs were taken daily and then weekly as they moved into January.  Bean was eating and drinking and having normal bowl movements but the team was still concerned that the contents might cause something to rupture.  In February, Bean finally passed the contents of the 2008 Christmas tree that had started almost two months before.

Bean was extremely lucky that Christmas and we are still talking about it 6 years later.  Remember when you are decorating this year, to puppy proof your decorations so your pet is safe.