Exotic Pets: Tardis the Blue Crayfish with a Case of the Blues.

Five years ago our family was gifted an exotic pet – a large, brown crayfish from our son’s third grade classroom named Clawzilla. He was a great pet, needing minimal care but still enjoyable for the family and 8 house cats to interact with. We would decorate the outside of his aquarium with holiday decorations while the cats would sit for large stretches pawing at the glass as Clawzilla scurried across the bottom of the aquarium. Unfortunately, Crawzilla passed after two years of being part of our family.

After the passing of Clawzilla our family did not seem complete without our pinchy family member. My husband and I decided it was time for a new crayfish and with the help of Dr. Coniglario we were able to adopt a beautiful, blue crayfish which we named Tardis after the blue phone box in Doctor Who. Tardis was doing well until one day in October when after a week we noticed that Tardis was not moving as much, he was reluctant to eat and seemed to have a case of the blues. Being alarmed and not wanting to loss another family friend I made a consultation appointment with Dr. Coniglario to discuss possible problems with Tardis and to develop a plan of care. After filling out the exotic pet history form and discussing the symptoms Tardis was exibiting Dr. Coniglario was able to conclude that the room we were keeping Tardis in was too cold causing him to begin to hibernate only to come out of the process a few days later when it warmed up. He also was concerned about the limited diet of feeder fish that we were feeding him. He recommended that we move Tardis to a room that had a constant temp of between 70-75 degrees and add elodea plant, sliced raw potatos, and frozen peas to his diet. After moving Tardis’s tank to our sons room and adding the elodea plant and vegetables Tardis was back to his normal pinchy, scurring self again in a few days. Tardis has now been a part of our family for two years. We have been able to watch him molt four times and with every molt he grows larger in size. Our 8 cats still enjoy watching the crayfish scurry across the bottom of the aquarium and can often be found curled up on top of his aquarium lid taking a nap after being out witted by the glass of the aquarium. Most parents dread the thought of having to care for the class pet but, my family and I are so happy we decided to adopt that first large, brown crayfish from our son’s third grade class!!!

Crayfish are freshwater crustaceans resembling small lobsters, to which they are related to. They are mostly found in brooks and streams which do not freeze to the bottom. They prefer fresh running water which has shelter against predators. Crayfish feed on living and dead animals and plants.

Crayfish can be kept as pets in freshwater aquariums along with bluegill or bass. They prefer foods like shrimp pellets, feeder fish, elodia, and various vegetables. They often will consume their own exoskeleton after moulting. Crayfish have a tendency to shift gravel around on the bottom of the tank, creating mounds or trenches to emulate a burrow. Crayfish will often try to climb out of the tank, especially if an opening exists at the top that they can fit through. 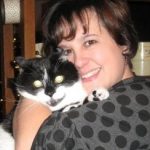 Meghan Burnell has been a veterinary technician for the last 15 years at Gilbertsville Veterinary Hospital. She is the human to 8 kitties all with their own special heath issues and one blue crayfish whose photo can be seen in the main entrance at to the hospital. She also is the hospital photographer and part of the social media team. She can often be spotted getting a patients history while her camera is hanging around her neck.

When it’s time to say goodbye

What do you mean – Fear Free?

Pet Sitter: The Right Fit For You