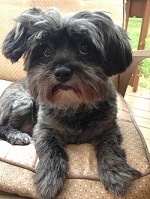 It has been almost 15 years since I toured shelter after shelter in Arizona looking for the right dog to join me on my journey back to Indiana.  It was finals week at Arizona State University and I was finishing up my first year of college.  After a long day of searching I finally found him scared and shaking in the back of a kennel in Maricopa County.  His tag said he was a stray approximately 7 years old, I looked into his eyes and that was it, he was the one.

The informative voluntary kennel staff told me he would be up for adoption on Saturday.  He also told me that multiple people were interested so he would be going up as a raffle, the winning number would win the adoption.

I tried to keep a positive attitude as I proceeded to the shelter to adopt “A.J.” that was the name that I gave him.  It must have been fate because my ticket won! After taking “A.J.” to the veterinarian I was told he was actually only 2 – 3 years old. 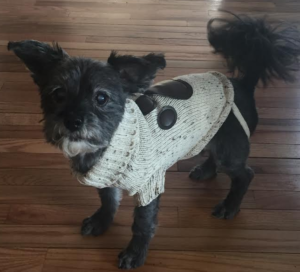 “A.J”, now formally “Jake”, and I have made it through quite a lot together.  We lived through many roommates, finished college, started our career and finally moved to Pennsylvania with now husband, Sal.

“Jake’s” hearing is now gone and his eyesight isn’t the best but his spirit is still great.  The bond that we have created is something very special to us.  I will forever be grateful to the volunteers and animal rescues / shelters for doing what they do, providing second chances for so many pets.