In Part 2 of our series, we are focusing on one of the highest skilled canines, the police dog. The police dog and his handler together make up a K-9 unit.  The majority of police dogs are German Shepherds, Labrador Retrievers and Belgian Malinois.  The key attributes of successful police dogs are intelligence, aggression, strength, and sense of smell. Only the most dedicated human officers are considered for K-9 units. They must have exemplary records, plenty of arrests with convictions, an outgoing, energetic personality, and strong physical conditioning. 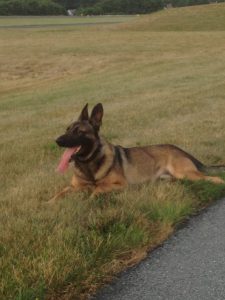 A dog sense of smell is about 200 to 400 times greater than ours and police dogs are trained to sniff out criminals, drugs, weapons, and bombs with more precision and ease than humans. It can discern a specific scent even when there are several other scents around. ­A police dog also uses its very presence sometimes to help prevent confrontations. The intimidating growl of a well-trained police dog can cause many criminals to surrender instead of running or fighting. Dogs are also faster and stronger than most humans, able to catch a fleeing criminal and clamp down with powerful jaws to apprehend the suspect until other officers arrive. All police dogs must also have superior obedience. They must obey the commands of their handler without hesitation. This is what keeps the inherent aggression of the dog in check, and allows the officer to control how much force the dog is using against a suspect. A police dog must be comfortable in public places and used to distractions like traffic.

Our own Pottstown Police Department is the home to three K-9 units who we have the pleasure of seeing at our office.  Taz (pictured above), Jak and Kato have been working to keep Pottstown and surrounding communities safe.  See our article about the K-9 units of Pottstown.